Find the answers you’re looking for from Midsouth Rectal Clinic.

When it comes to hemorrhoids — it’s not really a topic that’s openly discussed — yet roughly 13% or 20 million of US adults get them. It’s important that if you are managing hemorrhoids or think you may have them, that you have a resource where you can openly discuss this issue without feeling embarrassed or ashamed.

Midsouth Rectal Clinic provides support for those with hemorrhoids. Navigate the topic and learn more about what hemorrhoids are and the different types that affect people in today’s post.

Hemorrhoids affect the anorectal region of the body, and it’s important to understand that while they are common and preventable, no one is immune to them.

Hemorrhoids may not be visible, but they can appear as lumps and bumps in your anorectal region. 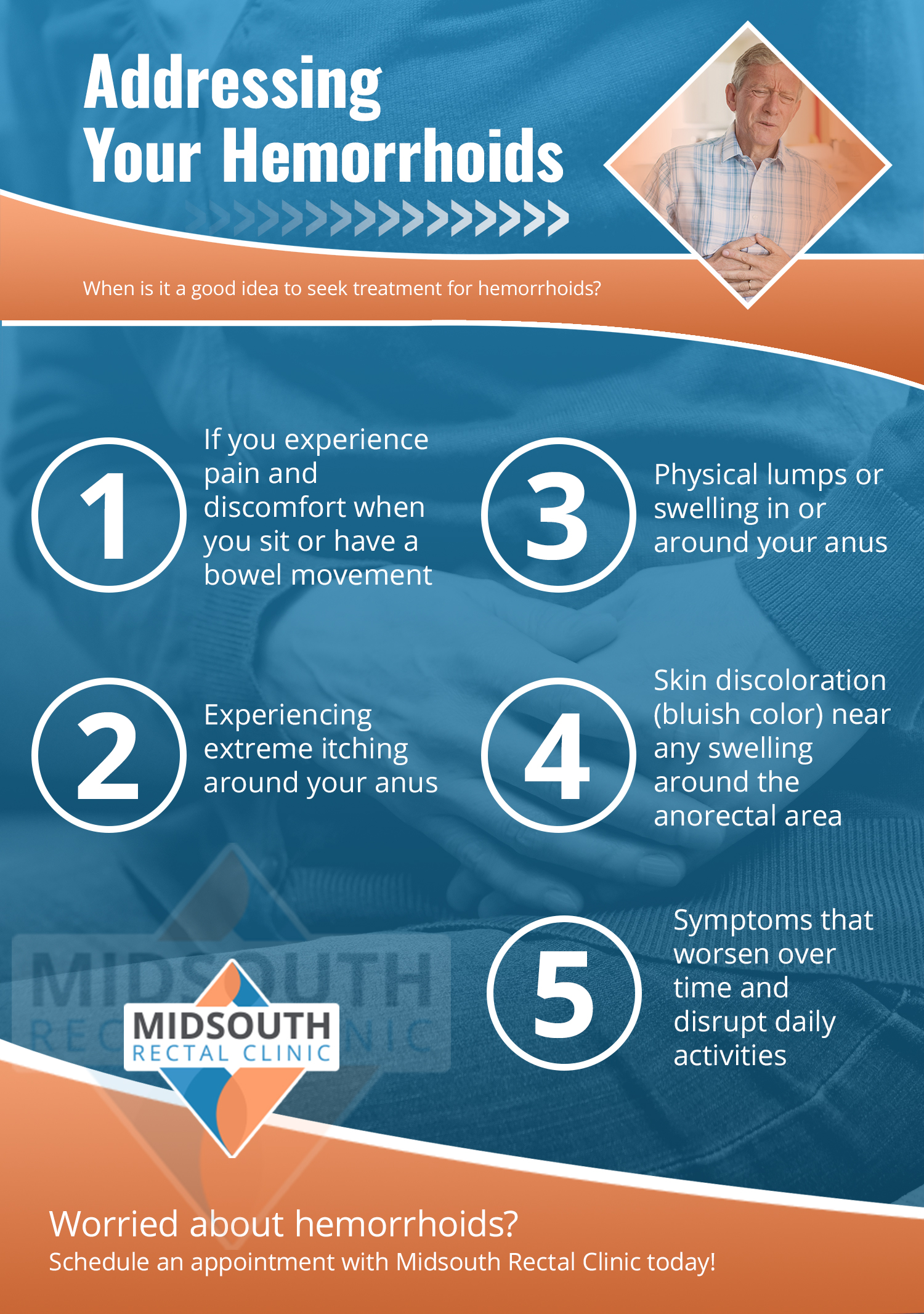 We’ve learned that everyone has hemorrhoids, and for the most part, they stay asymptomatic. It is known, however, that three out of four adults will experience symptoms of hemorrhoids at some point in their life.

Internal hemorrhoids are found within your rectum and remain invisible because they’re too deep within your anus to physically see them upon inspection.

Internal hemorrhoids tend to resolve themselves, but in some cases, they can stick out of the anus and become what is known as a prolapsed hemorrhoid.

There are no nerve pathways in the rectum so you won’t always feel an enlarged hemorrhoid, but do pay attention if you do begin to feel swelling or lumps near your anus, burning, itching, or increased pain or discomfort.

Internal hemorrhoids can become more inflamed and irritated as a result of feces moving through your rectum, and oftentimes this can cause bleeding that you may notice on your toilet paper.

While this type of hemorrhoid will usually resolve on its own, if it becomes too painful or disruptive to your daily activities, this is a good indicator to see your doctor.

Prolapsed hemorrhoids are internal hemorrhoids that become enlarged and protrude from the anus. There are four grades that physicians use to determine the severity.

Grade One – No prolapse, but slightly enlarged that can’t be seen from the surface of the anus.

Grade Two – Some prolapse, but will resolve themselves. These are hemorrhoids that may prolapse with pressure or straining from a bowel movement, but return to normal once the pressure is reduced.

Grade Three – A prolapsed hemorrhoid that needs to be pushed back in. This grade of hemorrhoid may need treatment to avoid becoming infected.

Grade Four – A prolapsed hemorrhoid that needs to be pushed back in, but is unable because of pain and discomfort. These hemorrhoids will need to be treated to prevent pain, infection, and any other future complications.

A thrombosed hemorrhoid has a blood clot (thrombosis) within the hemorrhoid tissue. This is a complication as a result of an enlarged hemorrhoid and needs to be treated as soon as possible to prevent further complications such as losing blood supply to your anus and rectal area.

Complications resulting from hemorrhoids are uncommon, but they do occur. They most common complications include:

Strangulation – Blood to the hemorrhoid is blocked, preventing a blood supply from reaching the hemorrhoid. This is extremely uncomfortable and can cause intense pain.

Anemia – If a hemorrhoid bleeds too much and too often, they can strip your red blood cells of essential oxygen. This results in headaches, shortness of breath, fatigue, dizziness, etc.

Infection – Because of the anorectal area that hemorrhoids emerge in, it’s easy for bacteria to get into bleeding hemorrhoids and cause an infection. If an infection goes untreated, this can result in complications such as fever, abscesses, tissue death, and more.

Do Hemorrhoids Go Away?

In most cases, hemorrhoids will go away on their own, but it’s important to learn how to prevent hemorrhoids through lifestyle changes such as dietary changes and consistent movement and exercise.

Hemorrhoids typically last a week or so, and should clear up within a couple of days. If symptoms go beyond a week without improvement, scheduling an appointment with your doctor may be warranted.

How Are Hemorrhoids Diagnosed?

While you’ll typically be able to feel or see hemorrhoids, your doctor will diagnose them through a visual examination, a digital rectal exam, and using an imaging scope depending on the severity.

Are you ready to have the conversation about hemorrhoids? Midsouth Rectal Clinic is here to listen and create a treatment plan that supports your body.

Learn more about our treatments for hemorrhoids that are painless, inexpensive, and covered by most insurances!